So I was recently asked by a client: “Why is the time on my PC 5 minutes off from my phone?”

I went and checked the registry and found that the server was pointed get its time from time.windows.com, but for some reason that was not working.

I then used the following command to point it to several of the pools hosted by NIST.gov

After that I restarted the W32Time (Windows Time) service to make the update work.

Once that is done it should force a resync of the time service which could take some time to update and to sync with all the workstations.

Today I wanted to talk about this is a little known feature that has existed on in Windows based workstations since at least Windows 7 when I first heard about it. Since then this “folder” for lack of a better work has been following me around to every PC I have had since then. 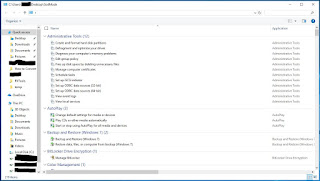 As you can see from the screen shot, There are about 219 (on my machine, your mileage may vary) settings that you can edit.

To gain access to this you first need to start off by creating a new folder. When the folder is created and you are asked to give it a name you will need to insert this String into the field.

Press Enter and the icon will change from this

I hope you found this helpful and informative, and I look forward to you coming back soon.

So I had a very strange wireless issue tonight. I have a Razer Blade 2018 Laptop and I use Google WiFi Access Points in the main floor of my house.
When connecting to my normal WiFi network I would get a notification saying I was not connected to the internet. I checked my IP address and a few times I would get nothing, another I would get an APIPA address, and other times I would get just the default Gateway.
I narrowed down the issue to being only with my laptop as all other devices worked fine. I rebooted the routers about 3 times after disabling and enabling IPv6.
I eventually looked at my clients that were connected and found my laptop on the list, even though it was saying it didn’t have an IP and could not get to the internet. It listed my laptop as having a wired connection, which makes no sense at all as this laptop does not have an Ethernet port.
I then set a Static IP and found that I could not get to the internet. I started digging through my WiFi Settings and found an option to present a different MAC address every time I connect to a WiFi access point. I then disconnected and reconnected and it Worked!!!
I do not understand why it worked or what the heck is going with my router that it is not accepting connections normally.
I will continue to work on this in the morning and will update when I have more information.
I think I am going to have to open a support case with Google… Ugh
UPDATE: I checked my laptop when I woke up, things were still working. I did a Windows Update and rebooted. Thing continued to work, Then I updated my Razer Software and rebooted, and things stopped working on my Primary WiFi. I can still use my Guest Wifi like a champ.
I then opened a ticket with Google and after troubleshooting I am no longer able to connect to the guest network.
I am going to try another Rollback to see if that resolves my issue.

UPDATE: So I am still waiting for Google Support to get back to me. But that does not mean that I am going to sit on my thumbs. So I installed the Razer Cortex App from the Synapse Store and it was able to generate a report of what is going on with my laptop. I discovered that my laptop had an invalid version of the Intel Wireless – AC 9260 Driver which was throwing issues in the Event log.

So I went on Intels Download site and performed an update on the driver installed, and after a reboot, things are working. I have shutdown the laptop 3 times so far and it is still working. Fingers Crossed that it stays this way.