How to patch Intel NUC 10 with latest ESXi 7.0 update? 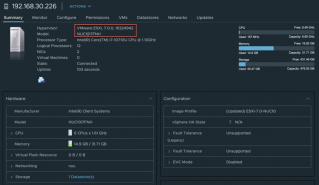 vSphere 7.0b was just released last week and one of the important fixes was to resolve an issue where Nested ESXi VMs were crashing upon powering on an inner-guest VM. This looks to have also affect newer generations of CPUs including Intel’s 10th Gen Comet Lake which is also found in the latest […]